Together for Transit and Community- Linking Ladson, Lincolnville & Summerville


Monday, May 7, Five days to #ConChaCo 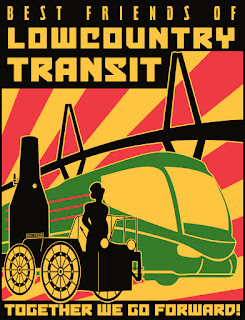 Note- This is the first of five public statements to be issued by Best Friends of Public Transit to prepare the community for Saturday’s ConChaCo event, a Charleston City Wide Transit Focused Festival along the #20 Upper King / Meeting Bus line linking the Farmer’s Market, Awakening Motion, The Greek Festival, the ConChaCo Pub Crawl & Restaurant Hop and the Night Market. Full information can be found in this previous media release. The Statements will be titled by our organization’s Motto: Together We Go Forward & ConChaCo and will announce a 6 pm event each day to help create better transit in the Lowcountry.


Transit implies togetherness. People share waits at stops, space on sometimes crowded buses and journeys. While the Lowcountry’s Culture of racism and class division have created obstacles for transit, our losing struggle against car and sprawl development created congestion is going to force us to come together.


Best Friends of Lowcountry Transit has talked to over a thousand people in Lincolnville, Summerville and Ladson in the past month to prepare for tonight’s Town Hall in Summerville with State Representative Marvin Pendarvis. We’ve attended a Town Council meeting in Lincolnville and a community festival to address the needs of struggling people in Sangaree. One hundred years ago a trip on the train to Summerville took less than an hour and Ladson and Lincolnville had busy train stations and multiple train trips a day to Charleston. Last week it took an hour on the CARTA #3 Bus to reach the isolated Dorchester Village Shopping Center and a $32 Uber Ride to get to a meeting of the Dorchester Planning Department. About five citizens came to that planning meeting.


The long planned Bus Rapid Transit line connecting Summerville and Charleston has wide support among all the citizens we talked to in Ladson, Lincolnville and Summerville, but there is pessimism about the will of elected leaders to get it done. As the pathetic attendance at the planning meeting shows, governing ourselves democratically is hard in a landscape where it takes a 32 dollar Uber Ride to get from the nearest bus stop to your government. Few will make the trip.


We also attended a Town Council meeting in Lincolnville, a community founded by freed slaves 150 years ago with a proud transportation tradition which once included it’s own trolley line. The Mayor wears a loaded pistol because the town struggles with people who choose to make their own opportunities outside the law, in part because they lack transportation options. However Lincolnville is ready to work for better transit, planning a major event with us to raise awareness for the fall.


In Ladson and Sangaree the elderly and disabled find a comfortable retirement slipping away from them. Many older citizens can no longer drive in the fierce, angry traffic.  We saw wonderful businesses struggling for customers because just getting on and off the road safely is a struggle.  There is a room full of slides and indoor playground equipment on Highway 78 at the Mellow and Play Café and a wonderful café which provides needed social and play space for that disconnected community.  Everyone would be better off if the could reach Mellow and Play Café without fighting traffic full of angry people who are spending far too much of their lives trapped in traffic.


How do we come Together? What do we have to do to build the transit system and tame the traffic monster strangling our lives?  We do it the old fashioned way. Our organization has already handed out 25 hundred leaflets in the Summerville, Ladson and Lincolnville areas about tonight’s meeting. We’ve recruit a trusted leader to run the meeting. We have a wonderful community center at the edge of Azalea park.  When 6 pm comes, we’re doing to stand up like the man in the Norman Rockwell painting, Freedom of Speech and we’re going to talk to each other. Neighbors are going to hear neighbors.


It’s the same way our ancestors started the effort to build the Best Friend of Charleston in 1927 when inadequate river navigation threatened the Lowcountry’s economy. In three years neighbors talking to neighbors led to the construction of the longest railway in the Western Hemisphere and you could get from Charleston to Summerville fast than you’ll probably be able to do this evening. Meeting like this (not the drop your card in the suggestion box variety, but the kind where the public hears each other) build the Transcontinental Railroad, the Panama Canal and put Neal Armstrong and Buzz Aldrin on the moon. We talk. We listen. We build. We move. It’s what Americans do. We’re a nation which has come Together on the move.


You can come together with us this evening in Summerville.


State Representative Marvin Pendarvis (SC 113) invites you to bring your thoughts about bringing better public transit to the communities of Summerville, Ladson & Lincolnville on Monday, May 7. Participatory activities for children and adults and informal discussion with community leaders will be from 6 to 7 pm. A formal presentation and Town Hall meeting about public transit will follow with from 7 to 8:30 pm. The Town Hall will be held at the Cuthbert Community Center, 105 W 5th South Street Azalea Park, Summerville, South Carolina. The event is free and open to the public.