Return the Rapid to Summerville May 13


Join the Dorchester Unit of Best Friends of Lowcountry Transit on May 13, 2021 at 6 pm for the regular Summerville Town Council meeting to demand an effort be made to restore Summerville’s connection to the planned rapid transit system to Charleston and to improvements to existing LINK service and the installations of functional bus stops in downtown Summerville. If you can, speak during the public comment period and hand up your written comments to the members of Town Council. Please bring 8 copies of your input, one for each member of council, one for the Mayor and one for the Clerk. We would love to have a copy as well.

Currently being controlled by the Berkeley, Charleston, Dorchester Council of Governments (BCD COG), over 8 million dollars has already been spent on planning and design. Without public notice or a vote by any elected official, a decision was made to end the transit system at the Fairgrounds on Highway 78 a few months ago. Local officials claim they learned about this in an email. There is no record of Summerville Town Council ever voting on this issue.

We know, from visiting these areas that people there want the rapid transit line to reach their area.

The BCD COG is currently pushing for a plan which leaves Summerville, Lincolnville and most of Ladson off the Transit line with the goal of submitting it for federal approval in the next few months. Summerville will miss it's opportunity to have it's rapid transit connection funded by the Trillion dollar Federal Infrastructure stimulus bill and that money will go to other communities. 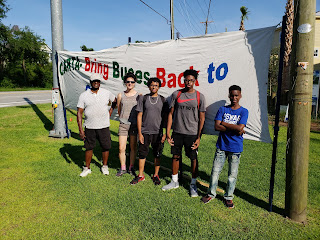 Summerville is supposed to get improved bus service to the fairgrounds. It currently takes 2.5 to 3 hours to reach Charleston on LINK and CARTA public transit, both currently operated by the BCD COG. Buses do not run on schedule. Buses often do not connect with each other in N. Charleston leaving riders with a half hour or longer wait. Stops on the Summerville to N. Charleston route are unmarked. Read Best Friends of Lowcountry Transit's report on the bus service between Summerville and N. Charleston.

No service from Summerville to N. Charleston on link will be available to take Summerville and Lincolnville residents to the Beach this summer since LINK doesn’t run those lines on Holidays or Weekends when the CARTA beach service runs to the Isle of Palms.

We've prepared a list of things you can do to try to get the Summerville Transit connection restored.

Ladson, Lincolnville and the parts of Summerville in Charleston County voted for and are paying for rapid transit. That promise should be kept.

Posted by William Hamilton at 1:24 PM