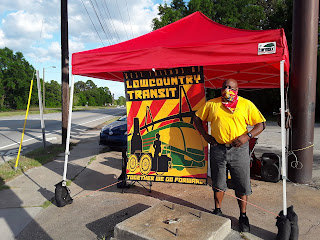 From Best Friends of Lowcountry Transit, Inc
To SC Press and Media

At the May 19th. CARTA Board meeting, Mount Pleasant Mayor Will Haynie announced that the Town of Mount Pleasant was prepared to pay half of the Sixteen Thousand Dollar cost of making the planned Summer CARTA Beach Reach Shuttle between Mt. Pleasant and the Isle of Palms fare free. The City of the Isle of Palms had apparently considered paying the balance, but as of the meeting had either decided not to do so or was still considering it.

Image, above, right Outreach in N. Charleston's "Macon" district helped begin an outreach effort which has already reached 12 thousand potential transit riders with information about the Reach the Beach Shuttle.

On January 31, 2021, the Isle of Palms showed a balance of Two Million, Forty Thousand and Two Hundred and Three Dollars ($2,040,203) in its accommodations tax fund for tourism development on hand, almost all of which was paid by visitors to the beach. See ATAX Agenda for Feb. 2021. https://drive.google.com/file/d/11iQk4jJVWk6zJ4Tf_aQPbTk2HB5nKoW9/view?usp=sharing Making the beach shuttle more successful will improve everyone’s beach experience this summer, even if you drive to and park at the beach.

During the CARTA board meeting, It was suggested that other municipalities such as the City of Charleston or North Charleston might step up to contribute the balance needed.

Best Friends of Lowcountry Transit supports the effort to make the beach shuttle fare free. We call upon the City of Isle of Palms and other area governments and business associations to pitch in the additional Eight thousand dollars to make the last leg of the transit trip to the beach fare free. We also believe benches need to be installed at the temporary bus stop on the Island which lacks shade and is two blocks from the town center where shade and seating is available. 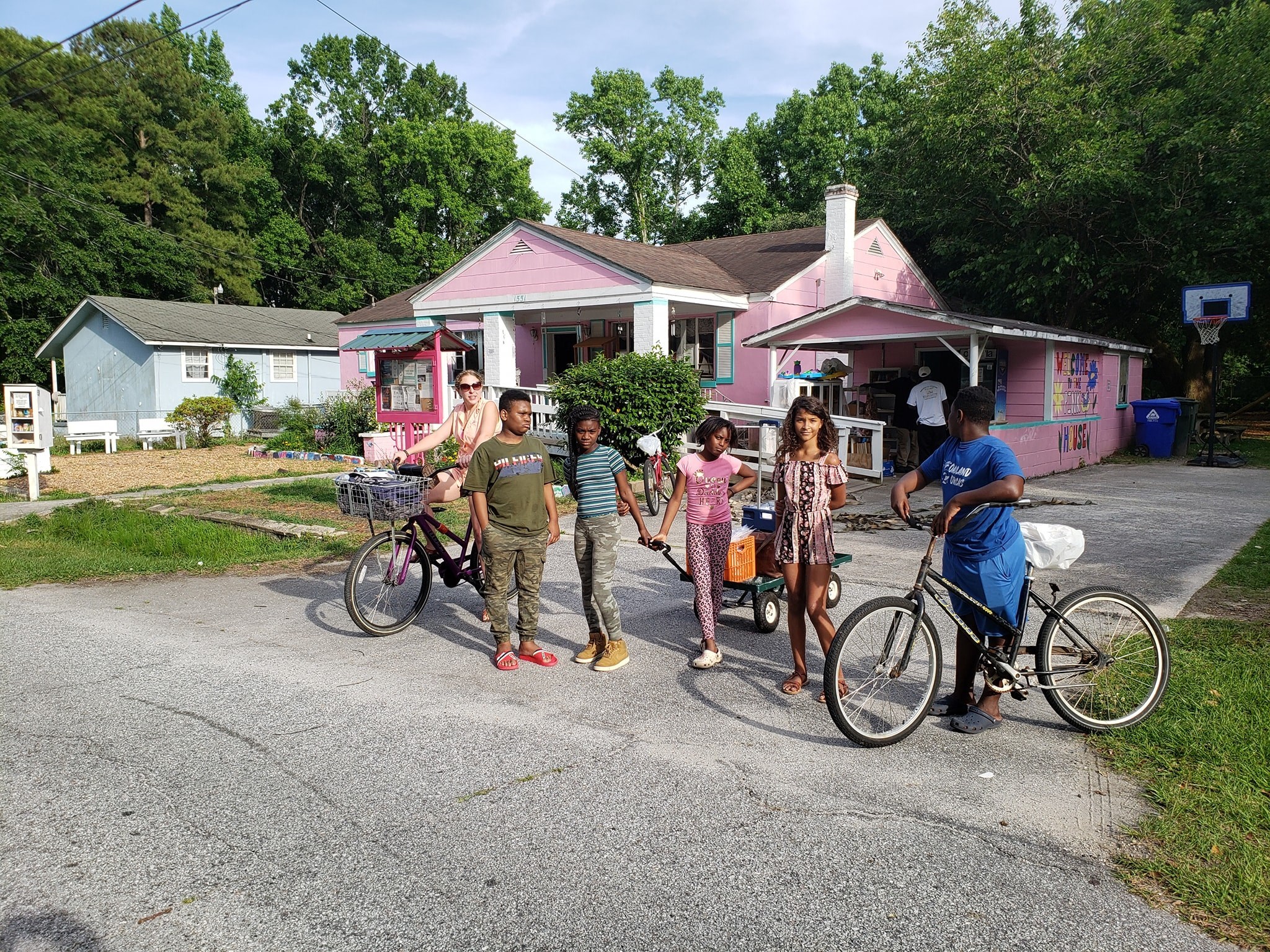 Image, Right, Transit Outreach West of the Ashley, May 18.

A family of transit riders traveling from N. Charleston or West Ashley will need an hour or more on the bus to reach Mount Pleasant Town Centre where they can transfer to the Beach shuttle. Since those trips require a transfer from other lines such as the St. Andrews of Rivers Ave. Bus to the Mount Pleasant #40 bus, those riders will have to pay another Two Dollars over the original Two Dollar fare they’ve already paid for the first two legs of their trip just to complete the last, short run out to the Isle of Palms.  In many cases, people using the system for the first time or not fully understanding the fare structure, may discover they lack change to pay and won’t have time to leave the bus to obtain change, meaning an hour wait for the next bus.

This last year has been an incredibly difficult one for our community. Some transit riders worked through the entire pandemic. Other transit riders have been returning to work in our critical tourism and medical sectors.  Bus ridership has already doubled over a year ago. Many of these people work two jobs. On their rare weekend or holiday off, we need to do everything we can to make their family's precious trip to the beach easy. Best Friends is already organizing transit beach outings for these children and families, many of whom have never been to the beach, despite living in the Charleston area for a lifetime.

Full details on the Reach the Beach Shuttle can be found at https://bfltransit.blogspot.com/2021/02/bus-to-beach-2021-unlock-ocean.html

Best Friends of Lowcountry Transit will continue its Open the Ocean effort is support of this new transit service with a multicultural community block party called Sea Island Luau at the Pink House Playa on Saturday, May 22 from 4 to 7 pm at the Pink House Neighborhood Resource Center West of the Ashely and a Bus to the Beach Barn Jam at Awendaw Green on Wednesday. The effort has already reached 12 thousand potential transit riders.

Our new beach shuttle service is the result of a six year community effort to return transit to the Atlantic and open the ocean. It should be a celebration for better things to come offered to the community in a way which will assure its success.

Posted by William Hamilton at 7:06 AM