We were dismayed to hear that the delayed decision to suspend operation of the HOP bus which was designed to help Food and Beverage Workers would go into effect on May 8.

We never felt the grass roots outreach to the rank and file workers by CARTA was fully effective. We've been doing outreach to F&B workers for years with our Benne Seed Initiative with State. Rep. JA Moore, but the lives of F&B workers leave them little time or energy to engage with the community. We've learned that traditional media such as local television and newspapers are almost useless in reaching this population.
While the initial lot was adequate and had shelters, the one which replaced it as a building project took over the original lot was small and had no seating. The planned replacement lot is even further North on Mt. Pleasant St, by Joseph Floyd Manor and Santis and that project has been in the works for over a year.
For people banging out plates of food to demanding customers every two minutes or faster, this pace of progress and quality of service wasn't acceptable. This with a lack of affordable housing, wages inadequate to meet the local cost of living and the general defects in our transit system is why local Restaurants and Hotels can't find the staff they need. Several major restaurant spaces are dark now because they can't find the staff to open. 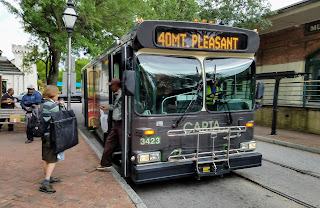 You have to go talk to Food and Beverage Workers at the right time of the day and week (not when they're busy) and the back door is more important than the front door. Our Corps of Conductor's members called this reaching the grease bin since most restaurant deposit their use fry oil in a container by the back door.

When we were doing outreach downtown we often found workers side by side at the counter, one who had been riding the HOP for months and their coworker bitterly complaining about the cost of parking downtown, who didn't know it existed. With skeleton staffing at so many places now, it's even harder to have the sort of conversations which open up awareness of transit options. These are people living under incredible pressure, working difficult hours.

Charleston's staffing problems in its hospitality industry, which are aggravated by weak transit service and inadequate affordable housing within reach of work aren't going to be resolved by people who drive big cars to reserved parking spaces from comfortable homes. The city's basic behind the scenes political systems lack of attention to the quality of life of it's workers grows out of historic origins and dark restaurants, early closings and asking guests to make their own hotel beds will be the future unless there is major change.

Crippling the planned rapid transit line with by leaving it running in regular congested traffic below Reynold's Ave. in N. Charleston and turning the railroad line into the city over for dog walking means slow service and for restaurants and hotels, that may mean no service in many cases.

We've been told the City decided to hand the railroad line over the Lowline greenway (the corridor is more than capable of accommodating both successfully) because they were told the appearance of a bus every 5 minutes would, "Diminish the User Experience." It brings to mind the cramped back passageways which allowed slaves to serve their masters without being seen 175 years ago which you can still see today in Charleston. Here are the details on the Low Line mistake.

The difference now, of course, is that the workers of Charleston are free (sort of) and they can choose other sectors and other places to work if they can't find a decent place to live or a reasonably quick ride home to their families after 8 or 12 hours on their feet serving visitors. We've met dozens of people during this pandemic who had worked for us for better transit and with the coalition of groups we participate in trying to get affordable housing who had simply decided to stop waiting and left to go live somewhere that had these things now.

Posted by William Hamilton at 7:37 AM