After very limited consultation with our membership within Best Friends of Lowcoutnry Transit came up with three major suggestions regarding the redevelopment of Rivers Ave. and McMillan, including the area round the old Navy Hospital, former Shipwatch Square and closed Kmart.

The Transit Hub and McMillian and Rivers needs grade separated access to bus stops and the BRT stop. Since this area will serve a large, dense population, including, ultimately whatever is build on the old Navy Base and connections from the West Ashley area, a lot of traffic can be expected. if affordable housing is included in the plan, a large population of senior citizens and disabled persons will be attempting to use these stops as well. It's not going to be efficient or safe for pedestrians to be crossing Rivers and McMillian on grade with ordinary vehicular traffic.

Spaces to transfer to and from BRT, regular bus service, rideshare and private vehicles (kiss riders) would need to be planned so that pedestrians can avoid crossing traffic lanes to the greatest extent possible.

Pedestrian overpasses should allow transit riders to access the BRT and bus stops going in the various directions without the danger of pedestrian / vehicle collisions. Nearby buildings could be connected directly to the hub from their second floors eliminating climbs up or down stairs and reducing the need for elevators.

It would be possible to bring the BRT up to an above grade station so that it avoids conflicts with traffic at that intersection as well, creating an above grade streetscape dedicated to rapid transit and pedestrians. This is an expensive option, but it would transform the region's mobility with a vastly better gateway experience to the community. Ordinary pedestrain overpasses would be functional at lower cost.

Rising rent, parking and space costs are making downtown Charleston a less practical place for young creatives to establish themselves. Youth oriented cultural activities are also leaving the old City and becoming disbursed to suburban areas where they find their market.

A modestly sized cluster of incubator spaces for artistic work, performance linked to nearby affordable housing could produce huge benefits for the area and N. Charleston. it would help transform public perception of the area. it could leverage large scale civic spaces in nearby existing Churches and the new library to support events which would support a positive cultural and civic life in the area. This would would reduce crime and attract economic activity.

All of this would be linked by the planned Bus Rapid Transit Line to the established performance spaces and tourism entertainment market in downtown Charleston. An actor, musician or stage technician could reach work at the Dock Street Theater or a downtown Hotel in 25 minutes without any need for a car.

Meanwhile, small, modestly scaled studio and performance spaces at McMillian would allow younger creatives to put on events there with a local focus at low cost. They could find affordable housing with walking distance. This would be accessible to young artists in the already existing surrounding communities as well.

We've seen projects like this in other cities. Most were built around performance spaces of 99 audience seats or less and bare bones studio space. Regular co working spaces were usually found nearby. I've been to one such space in Seattle- http://www.12avearts.org/ and another in Philadelphia where the entire complex, including three functional performance spaces was inside a former town house on a street with no parking.

Some sort of office of the policemen patrolling the area needs to be included. Since this is a walk able, transit oriented space, a significant part of police work will need to be done on foot. on a bicycle or by the use of smaller electric vehicles. It may be worthwhile to train officers in how walk-able, urban, transit enabled spaces are supposed to work. Cultivating the goodwill and understanding or residents and visitors in outdoor occupied spaces would help drive crime out of the area. The hundreds of pairs of eyes put on the sidewalk, transit stop and public areas by transit riders and residents can assist the police in keeping the area safe and successful. 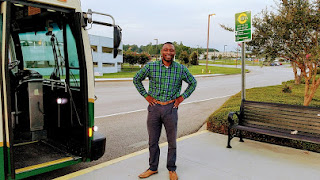 State Representative Marvin Pendavis (iamge, right) wrote an Op Ed in the Charleston Chronicle dealing with redevelopment of this area in Fall 2018.

We understand that many other issues must be considered in this planning, including creating a significant amount of affordable housing for people in the area and those being priced out of living downtown, including those in our Hospitality and Food Service Industries.  We also understand that the quality and performance of the entire future Bus Rapid Transit line is important to this project. We've treated those issues extensively in other materials and did raise them with the planners at our interview. We also know that Metanoia and CAJM also brought up those issues.


Posted by William Hamilton at 9:13 AM