The Lowcountry can have real, rapid transit linking Charleston, the Neck, North Charleston, Ladson, Lincolnville, Sangaree and Summerville. 250 million dollars to pay for it has already been raised through the half penny sales tax referendum in Nov. 2016, which Best Friends of Lowcountry Transit helped win. Planning for the system is proceeding now and needs more public input. The current estimated time for the start of operation is 2025, however it will take massive public involvement and pressure for that to hold.

This page is an evolving overview of plans for the Bus Rapid Transit Line from Summerville to Charleston. Best Friends of Lowcountry Transit have worked as advocates for this effort for 8 years and we were instrumental is delivering the margin of victory in the November 2016 referendum. Bus Rapid Transit was proposed for our region because Light Rail would have cost over 2 Billion dollars more. 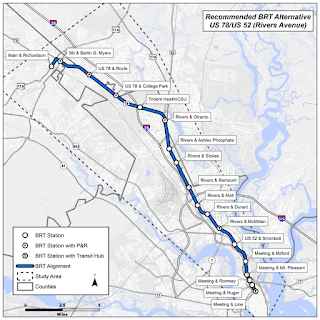 We do our work through community events and activities- If you want better transit, showing up really matters. You can view our upcoming events on Facebook.

Planning a transit connection between Charleston, N. Charleston, Ladson, Lincolnville and Summerville has been in process since the early 1990s. There have been several major proposals including light rail, commuter rail, monorail, and express bus. Currently the #3 express bus line runs from Dorchester Village Shopping Center (a few miles West of Summerville) down Dorchester Road to Charleston. It's also possible to take the #1 Espress to the Otranto Park and ride lot and transfer to complete a trip to Summerville on Tri County Link which will take you all the way to downtown Summerville. Travel time for the CARTA / LINK combined trip from Charleston to Downtown Summerville varies from 90 minutes to 2.75 hours depending on time of day and success at getting to the transfer point on time.

Posted by William Hamilton at 11:43 AM