Know what bus service your Town or City will get before the budget is approved.

This July is the time to ask your Mayor and Town or City Council in Charleston County to demand accountability for better bus routes in the CARTA budget process. Ask them not to approve the budget until they've seen a CARTA board approved plan for future bus service in your town or city.

All four members of Mount Pleasant's finance committee declined to approve CARTA's "preliminary budget" as a meeting on Monday, July 2 and referred the matter to the Town's Transportation Committee for review. After public comments by Best Friends of Lowcountry Tranist Executive Director William Hamilton and a presentation by CARTA Director Ron Mitchum, Town Council members on the committee said they needed to see clear proposals for future bus service in the community.

During his comments, Mitchum accused Best Friends of dishonesty and suggested that with friends like Best Friends, CARTA didn't need enemies. The committee asked Mt. Mitchum to move on from that theme to the issue of bus service. Mitchum said no major reduction in the total hours of bus service in Charleston County was planned for the coming year, but indicated changes were possible and that a study was underway by a route advisory committee. There is also some sort of 50 thousand dollar study planned about bus service to hotels as well.  There are at least three other transit related studies going forward or recently finished at the moment, the total cost of which is unknown.


We urge transit riders throughout Charleston County to ask their municipal governments to decline to approve next year's CARTA budget until we know how the funding made available through the half penny sales tax will or will not improve bus service next year.

County Council promised included 600 million dollars for improved, transit, 250 for a BRT line and 350 for improved bus service in a resolution passed by County Council in October 2016, a month before the half penny sales tax referendum vote. Mt. Mitchum denied any specific promise was made about transit funding as part or the referendum.

Best Friends sent the following letter to Mt. Pleasant Town Council.  It has also filed a Freedom of Information Act Request with CARTA. 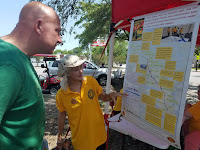 We believe CARTA’s rushed effort to get their budget approved by the Town of Mount Pleasant is premature in view of their pending plans to reorganize the East Cooper Route System again. We would urge the Finance Committee to Defer any action to approve the budget, which was described at the last CARTA Board Meeting as “preliminary” until the Town and East Cooper area know what sort of bus service the tax papers and transit riders of our area (who pay approximately 40% of the County’s sales taxes) are going to receive for their money.


We’re informed and believe major changes to our existing bus service are planned. We remind council the last round of bus service cuts reversed years of progress increasing ridership. It left us with a dysfunctional, part time #42 route on the North end of town, reduced service, and no provision for connecting service to N. Charleston or the beach. It did not offer the improved service promised in the I26alt study published prior to the half penny sales tax referendum.

We should use the budget process for CARTA for the purposes for which it was created - to assure accountability to the municipalities, taxpayers, and riders the authority is supposed to serve, who now face the prospect of increased taxes for decreased service.

Posted by William Hamilton at 9:44 AM