African Americans have contributed mightily to the history of transit in the United States. Some are remembered, like Rosa Parks who refused to give up her seat on a Montgomery Bus and helped recruit and train Martin Luther King as a Civil Rights leader. The “real McCoy” refers to an engine lubrication system which transformed railroading, invented by African Canadian Eijah McCoy. She went on to become the national Poet Laurette, but Maya Angelo was also the first woman streetcar driver in San Francisco.

Much of the local history of African Americans in transportation is unremembered. A year long project to change that will begin at the Sea Islands Transit Improvement meeting on Wed. Feb. 27 at 6 pm at the Johns Island regional library.

This proud tradition is found in the Lowcountry as well. It is time to recover this lost history. The effort will begin on Johns Island at the Sea Island Transit Improvement Meeting on Feb. 27 at 6 pm and end a year later, during Black History Month on Feb. 4, Transit Equity Day, the Birthday of Rosa Parks, with presentation of an entire ensemble of educational tools to share this history and energize its inheritors.

We know African Americans helped build the first railroad here. Plans were discussed to have African American engineers work under the supervision of white conductors. At least one black fireman helped operate the Best Friend of Charleston during it’s first months of operation before being killed in a boiler explosion. He’s often played for laughs in the historic narrative for allegedly weighing down a pressure relief valve. Is that story true. He was a pioneer in the history of transportation. Pioneers often die operating new technology. Ask the aviators. Ask the Astronauts.  What was his name? Where did he live? What words were said for him at his funeral?

Robert Smalls was in Transportation. He Helped rig and run the boats which moved people around Charleston Harbor when ferries and boats were a major part of our transit system. In May 1962, he commandeers the Planter and give dozens of African Americas of short voyage to freedom from a dock on the Cooper River. His story is better known that others, but it grows more powerful in context.

Mary Bowers forced desegregation of Charleston’s Horse drawn Street cars in 1867. A free woman of color, she stepped out of a mass meeting on Marion Square in April to demand her right to ride on the City’s whites only transit system. (Separate cars for African Americans were on order.) After the driver refused to move the car until Bowers dismounted and with the entire line being held up consequently,, Mary got off the vehicle, warning, “there would be trouble.”

There was. Windows were broken. Buildings were set on fire. The extent of public disorder is disputed between the newspapers of the time with conservative papers like the Courier saying little happened and other papers describing riots. Finally, Mary filed a complaint with the US Army, which was administering military reconstruction of the conquered Confederacy at the time. General Scott suggested the Streetcar company comply with federal law voluntarily. (Black US Soldiers with bayonets was the other option.) In May, 1867 every Charlestonian gained the right to ride.

We celebrate the right to ride every May in Charleston, this year with a march to the Sea from the traditional African American community of Sol Legare, where CARTA service now end, 2.4 miles to once segregated Folly Beach. You are welcome to join us on Saturday, May 4 at the Bus Stop where we’ll march to the Atlantic to close the only remaining gap in our four-year campaign to get Transit to the Atlantic. Sign up for The May 4th March to the Sea.

We know the Freedman’s settlement of Lincolnville had its own Trolley System in 1910, which grew out of that community’s powerful railroading tradition. Who built it? When did it operate? What, if anything survives of that system? When we join the Town’s back to school festival in August, we would like to be prepared to share that history with Mayor Dewberry and the town’s people.

The soon to open Intermodal Passenger Transit Facility (should have just been called “Liberty Hill Station” a name which rings) will include a history room covering that traditionally African American community where working in the railroad yards was a part of life for generations and other issues. It was the location of one of the last segregated train stations built in the United States, recently torn down. Who where those people. What were their stories?

1938 to the Present, Civil Rights Era

1938 Marked the end of the era of electric traction in Charleston. WWII brought huge numbers of people here to work in the Navy Yard. How did race and this transforming transit system interact?

In the 1950s and 60s, Esau Jenkins fought for Civil Rights on the Sea Islands, becoming a titan of the movement. He found funding for and operated a fleet of VW buses to connect residents of the then rural islands, across a segregated and sometimes racially violent landscape, to the regions only black hospital, high school, urban employment and economic opportunity. On board, passengers got lessons in voting rights, literacy and health. Plenty of people who rode those buses are alive today. What are their stories? Were there schedules or printed materials? Did people really learn to sing the great songs of the Civil Rights movement like We Shall Overcome on the long, hot rides to and from Charleston? 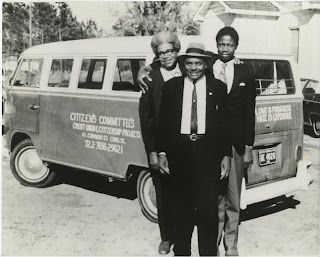 One of those buses still survives. It hasn’t run in decades. Its back hatch was removed to be placed in the African American History Museum at the Smithsonian. The rest of the vehicle was later conserved and put on display on the national mall in DC next to a Chevy Corvette Stingray owned by one of the Apollo Astronauts both of which were drive at the same time, on the same road Highway 17.
What of segregation on SCE&G’s buses? How and when did it end? Activist Louise Brown doesn’t remember any major actions here, but everyone is sure there must have been some lost in the vast clutter of activism from those challenging times. Are those hero's still alive? Can we capture their stories?
However SCE&G also ran the buses in Columbia, SC and On June 22, 1954, Sarah Mae Flemming refused to surrender her seat on a bus there, leading to several lawsuits and legal actions. Read her full story here.

Muhiyidin D’baha worked occasionally as an activist in our Transit effort before he was shot and killed in New Orleans a year ago. He helped leaflet bus stops and sign up supporters as part of the effort to pass the half penny sales tax and fund the rapid transit system. He once shut down the Ravenel Bridge (0ver our objections) because there were things more important to him the smooth traffic flow for cars.

What of our current African American Transit operators and mechanics? What are their stories? They may not be history yet, but they could be in a generation. We’ll need to capture those stories before their gone.

My Story, For a Start

Warning - Not everyone recognizes the Southern imperative to explain oneself in historic context. If you don't care about who the author is and what his family has been doing for the past 320 years, you might want to skip this section.

I have worked on history of all kinds for over 30 years. I helped save the only handwritten copy of the City of Charleston’s census of free persons of color from a trash heap in 1986 when an aging Lawyer was clearing out his office and had long ago despaired of anyone taking “these old books.” I also saved the records of James L. Petigru, the Charleston Unionist Attorney famous for saying, “SC is too small to be a sovereign nation and too large to be an insane asylum” during the Secession convention in 1860.

My Father rewrote the book on how tourism and real estate were marketed in Charleston in the 1960s and 70s as an associate and later principle of Bradham Hamilton Advertising. It was he who discovered that you could sell condos here to people in Ohio. In 1970, he did the advertising for Charleston's first major desegregated Theatrical event, the Tricentennial production of Porgy and Bess.
I attended desegregated public schools, graduating from Wando High in 1978. In 1976, I helped celebrate the Bicentennial and participated in integrated community history workshops. I’m a graduate of the USC Honors College and the USC School of Law. I was young and strong when Hugo blasted the land to pieces in 1989 and worked to prevent the evictions of poor people from their homes in the aftermath in the reckless way that only arrogant young lawyers can do. I have a patient and historically curious wife of 32 years, Julia who will stop for the first few historic markers of a day on the road.

I’ve been a civil war reenactor and the lawyer for the 54th. Mass. Volunteer infantry (The African American Unit depicted in the movie Glory) here. I sit on the board of the Slave Dwelling project with Joe McGill, who I used to shoot at in pretend battles when we both were younger. I’ve written a million words on life in the Lowcountry and I’ve been riding the bus since 1978.

That’s a lot, but since we’re going somewhere, we need to share where we’re from.

It’s time to recover and share our African American transit history in the Lowcountry. It’s time to connect it to all our other history, the wars, the disasters, the harm we’ve done each other and the dreams we’ve tried to share.
Just beyond this, we have fellow passengers in the Latino, Filipino and European American communities which stores to share. We’ll talk about it on the bus. Later, we’ll build those stories into the Metal, concrete and wood of the rapid transit system. Every station should have a name, a story and a song.

300 hundred thousand more people are coming here to fight over the land which isn’t under the ocean yet. We need to get our stories in order and connected so we can make these newcomers part of it without losing it. When we know where we’ve been, we’ll be able to find out where we’re going. Once we have that, we’ll be on our way.

Together, We Go Forward!

Posted by William Hamilton at 10:11 AM