Transit Planning for SC Lowcountry About to Begin 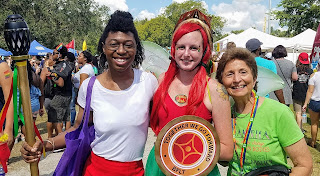 North Charleston, SC - Rapid Transit may finally come to the Lowcountry and South Carolina if local authorities move on planning this Fall for the long promised Bus Rapid System approved and funded by voters in the 2016 Half Penny Sales Tax referendum. Best Friends of Lowcountry Transit is planning to reach 10 thousand people with face to face conversations and information this fall to help prepare them for the upcoming meetings.
County Council will consider the issue at their Finance Committee meeting on Thursday, November 18 at 5 pm at the Lonnie Hamilton County Services Building. The public can attend this meeting or watch the online stream webcast. You can read the agenda at https://www.charlestoncounty.org/departments/county-council/packets/2018/10-18-18-Finance.pdf

On Wednesday, October 25, the CARTA Board of Directors will meet at 1 pm, at the Lonnie Hamilton County Services Building. The public can attend and make comments during the meeting. There is a facebook signup for those would would like to attend as part of a demonstration of support for better transit. https://www.facebook.com/events/482075578965019/
It has now been almost two years since Charleston County voters approved the half penny sales tax after County Council promised to devote 600 million dollars of the total to be collected for better transit in the Lowcountry. (Billions of dollars will be spent on roads as part of a program funded from multiple sources.) In the past two years, more studies have been conducted. Collection of the half penny tax began in May 2017.
We’ve been informed by CARTA representatives that,”(T)he BRT is moving forward. Engineering firm signed. Team kickoff meeting has taken place. Public involvement plan being developed. Stakeholder outreach begins soon."
Earlier this fall, they Mayor of Summerville recorded a video asking for input on the plan.


The 23 mile transit line connecting Charleston, N. Charleston, Ladson, Lincolnville and Summerville will put high tech hybrid electric buses in dedicated lanes with service running as often as every 10 minutes during peak hours. You can see a detailed diagram of what the system might look like in this Gold Standard BRT PDF.
In September a new Tri County link bus service connected Summerville with Charleston, but the current trip takes between 1 hour and Twenty Minutes with no stops in N. Charleston in either direction except the transfer in Otranto using the Tri county link CS2 route and the CARTA Express #1 route. Completing the same trip on the #10 CARTA bus with 53 stops along the line in N. Charleston takes a total of 2 hours and 33 minutes. Plans for the Rapid Transit system promise a trip with 16 stops along the line in 59 minutes.

A rapid transit line like the one planned would enable revitalization of Rivers Ave and accommodate tens of thousands of new residents and affordable housing with those people finding the automobile optional in their day to day lives. Employment, shopping, healthcare and community can all be found within easy walking distance of the stations planned along the line, including Northwoods Mall, Downtown Summerville, the rapidly developing high tech Charleston Neck and Line Street in Downtown Charleston. Passengers choosing to leave their cars at homes near the line or choosing to live without owning a car will relieve pressure on overburdened roads like I26, Dorchester Road and Rivers Ave.
To help make sure the public has the opportunity to participate in creating this new system this fall, please see the Best Friends of Lowcountry Transit at www.BFLTransit.com or call William Hamilton at (843) 870-5299.
END END END
Posted by William Hamilton at 12:29 PM